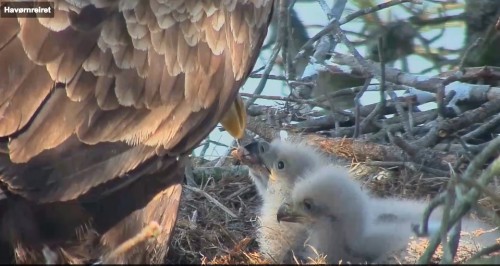 Quote:
Google translation from Facebook https://www.facebook.com/havoernene?fref=nf: Several of you so that when the female accidentally got his own youth in the claw ( another drama in our most dramatic season! ) Now we have found the clip, so that everyone can see it here.I could not watch all of the video, it was too difficult to see. https://www.youtube.com/watch?v=PCWQ4V9 ... redirect=1


Oh, in the video you can read that it happened already in the evening of June the 1st! What a relief, since then the chick has been ok.

June 10
Mum arrived with a very big prey, dark - cannot see whether it is a bird (a coot?) or a mammal ...
The older chick is being fed with it for a while, but the chick is tired, so is the younger one in the nest bowl - both with full crops

The smaller one squeaks though from the nest bowl but doesn't approach the parent on the left corner of the nest, s/he just falls on her/his full crop when trying to come up ... The li'l one got up but goes to a different direction, away from the prey ... At last also the li'l one gets fed - if there is some room in that full crop

20:51 DT
Mother finished feeding and eating and went to the nest bowl, where the li'l one followed her. The older chick lies in a proper food coma in the middle.


Owlie
Re: White Tailed Sea Eagles in Norway
June 13th, 2015, 3:27 pm
Location: Northern Finland
The sample taking from the chicks happened some time between 09.00-10.00 this morning.
Baronessen made an inspection in the nest at 11:08.
And Baron Blå came with birdpreys at 11:56. So everything is fine in the nest.

BTW They show on an smaller screen videos just now - the language is Norwegian, of course.